Every data point tells a story. This one’s hers.

According to the UNHCR’s open data, there are more female Syrian refugees than male refugees, with women and children currently comprising 76.6% of the 4 million Syrian refugees. 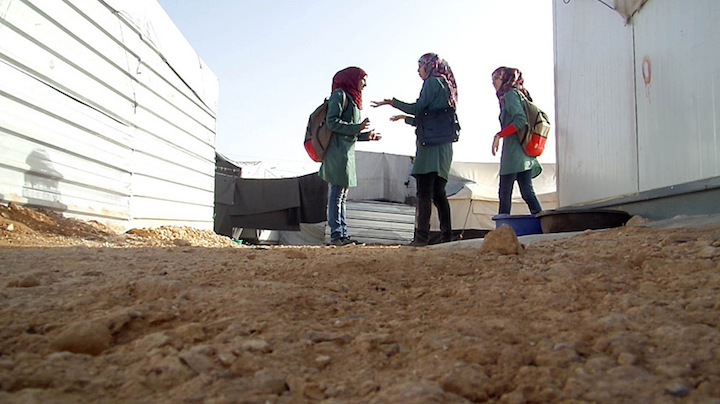 Photo taken from “Waves of Childhood” - a body of work created by Syrian refugee girls ages 14-18 from Jordan’s Za’atari Camp during a media workshop encouraging self reflection and story-telling. Image Source

Displacement, as a significant risk factor for human trafficking, acutely affects Syrian refugees as they travel to seek asylum in other countries. Their high level of vulnerability to human trafficking is especially concerning, considering the overall percentage of women and children refugees displaced. Additionally, the number of child marriages of Syrian refugee girls is on the rise, cutting off access to future education and employment, as well as autonomy and empowerment.

Why is Smartphone Technology Relevant for Syrian Refugees?

Researchers at Penn State found that over 86% of young refugees own smartphones and 50% use the internet at least once per day or more.

Noor, a 17 year old Syrian refugee who uses her smartphone to research about Sweden, also uses the Gherbtna app, and wishes there was a similar app for Sweden. She would like to live and work there, and wonders if everyone in Europe thinks that they’re poor or don’t want to work, and only receive money from the state.

Like many other Syrian refugees, she has high hopes of a future beyond her refugee camp. She ends: “I want to become a computer programmer like my father.”