Last Friday brought the closing to the three-day, interdisciplinary tech conference Tech Open Air (TOA) Berlin. Bringing together 150+ speakers and a few thousand attendees from various backgrounds, we were looking forward to attending the 5th anniversary of this staple of Berlin’s tech community. This year TOA was hosted at the beautiful former East German radio building, FunkHaus. 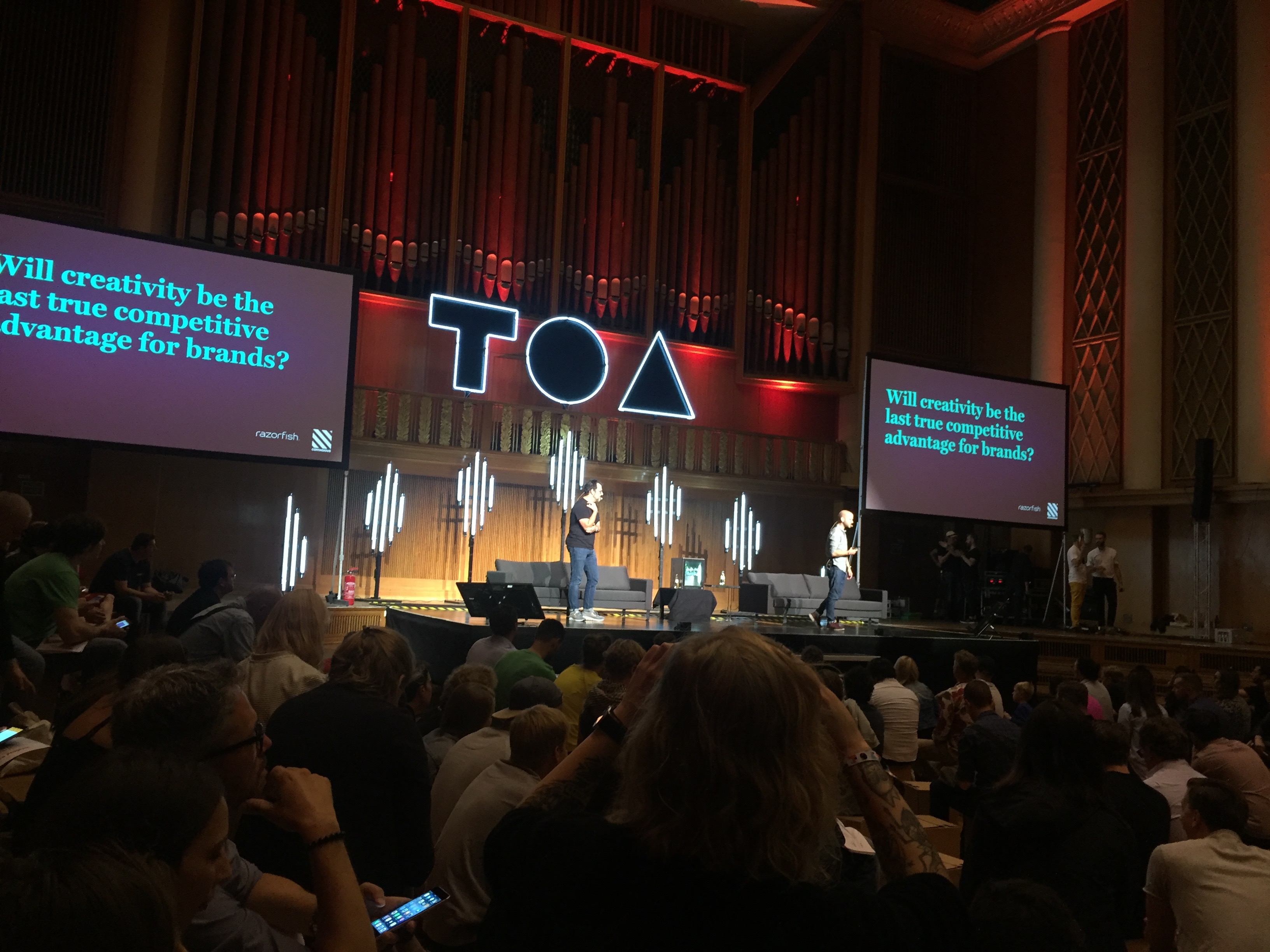 Wiredcraft attended its first TOA last year in 2015, with our over 90% of our team flying from Shanghai to Berlin to attend the event and check out the city that would be home to our next office. As an office, the Berlin team collectively enjoyed TOA because designers, developers, CEO and marketers took away a little something different and it was very easy to move around and attend many talks. As soon as early bird tickets went on sale for 2016, we jumped on them and the newly minted Berlin office attended the 2016 edition of TOA.

2015 went so well and we had an amazing time, so our expectations for this year’s edition were pretty high. The main conference for TOA16 did provide some spectacular talks, but some operational failures really let us down and affected our experience. 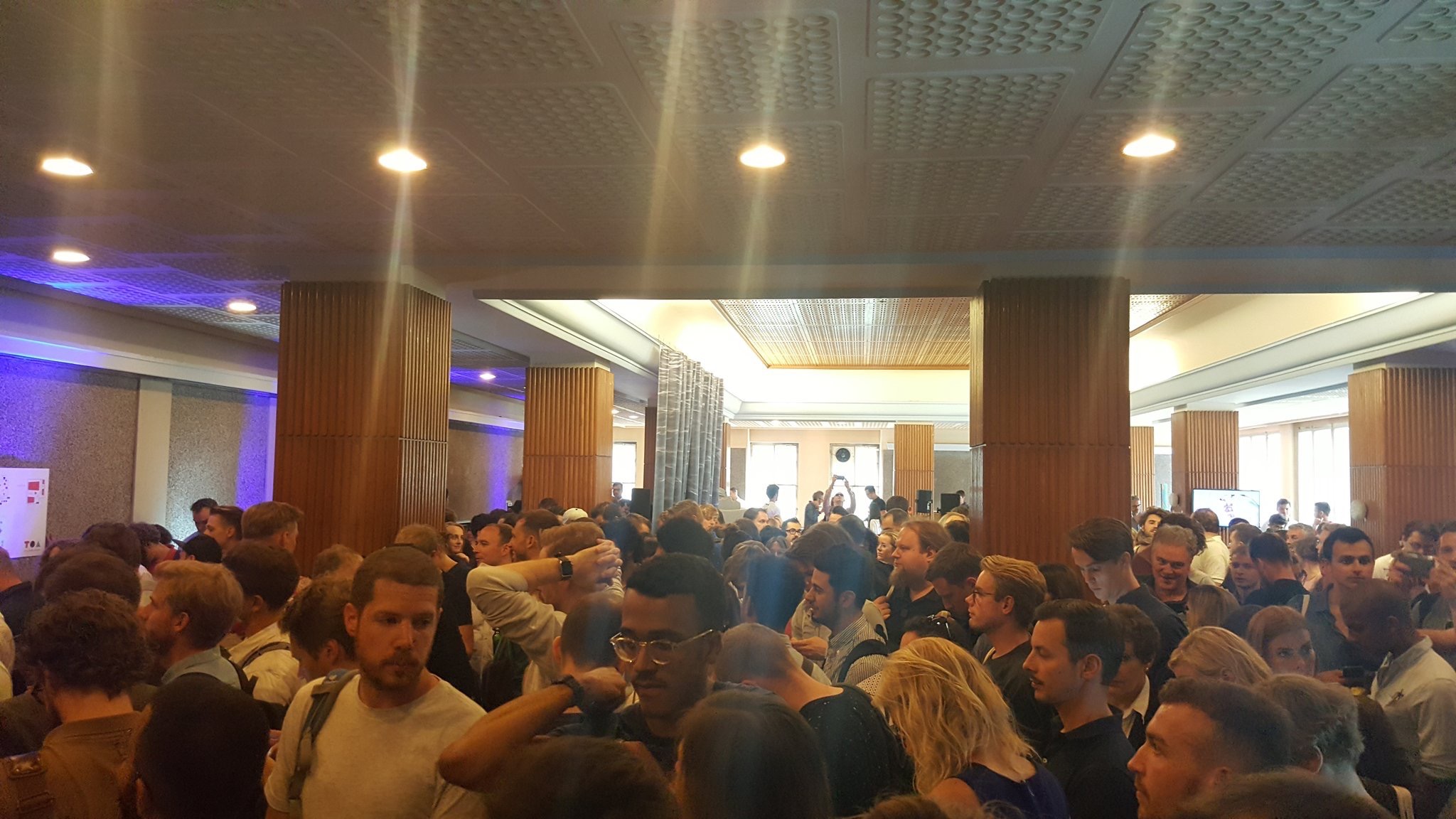 Last year, I felt very free to move about where and when I pleased. I knew I could leave myself less than 5 minutes between talks and not miss a thing. This year, that wasn’t the case. I found myself constantly debating which sessions to attend because seeing a 10- to 15-minute ignite talk would require committing at least 45 minutes.

I arrived at one of the studios about 15 minutes early for a session and walked to the front of the line to ask what the next talk was and if it was running on time. I was met with a shrug and an “I don’t know” from the TOA employees. Then I returned to the back of a line of several dozen people and waited.

When I finally entered the space, I found the talks were running one or two behind so I had a real Sophie’s Choice on my hands: wait for this talk or leave now to catch the next one in an hour. This meant I found myself firmly planted in a seat in one studio and not getting to explore the conference. Additionally, the queues didn’t really coincide with the room schedules, so I’d often walk in halfway through a talk, which interfered with my experience and everyone else’s.

I wasn’t the only one feeling this way. #TOA16 was a constant stream of people complaining about overcrowding, long lines, and missed talks.

Sorry to say, but the room situation at #TOA16 is one of the worst of all conferencea I've ever attended. And that's a lot.

Except for one studio, the emcees didn’t manage the rooms very well, not directing people to fill the many empty seats in each room (which contributed to the long lines). Announcements of delayed talks never happened. I often found myself watching the clock, realizing I wouldn’t make it to another stage unless it was also delayed, but had no way of knowing.

As talks wrapped up, the TOA team wasn’t very proactive and didn’t have mics prepared for Q&A, so the audience was often left waiting for microphones for the Q&A to start.

It felt like individual micro-conferences were being run on each stage, instead of one cohesive conference.

In my opinion the biggest missed opportunity was networking. There were ample opportunities for founders/ceos to meet with VCs, but for the rest of us techies, we didn’t have any convenient places to meet and chat.

The most socializing I did was while standing in the damp, sweaty hallways of the venue, chatting about the meager quality of Pokemon in the area and through retweets on Twitter. There wasn’t an easy place to foster personal or professional connections with this year’s conference setup. This was a serious letdown for me personally because TOA 2015 had a fabulous beanbag area for hanging out and socializing with everyone.

Networking was much easier at the many satellite events hosted throughout the city, but these events were open to the public and require additional (free) tickets for the TOA conference.

Where was the tech at Tech Open Air?

Our developer left the event early the second day, since he had seen all the real tech in about 20 minutes. We appreciated the dream of uniting many interdisciplinary tech aficionados, but there was a lack of serious tech beyond the VR lounge. The tech-focused talks that we were able to see, such as the multiple blockchain talks, didn’t really reach out to developers.

I don’t mean to say the conference had the wrong focus, but we would’ve really enjoyed seeing talks more tailored for developers and designers with actionable and practicable content. I should mention this qualifier: our experience is limited to what we were able to see, naturally, and others may have had a much better feeling about this matter.

Despite the operational failures, TOA brought a stunning lineup of speakers. Some of my favorites were Cindy Gallop, David Poeppel, Daniel Bonner, and Katie Dill. They brought passion and levity to their sessions and made me feel inspired and challenged. The speakers are the strongest and truly best part about TOA, although it’s difficult to choose the talks based on the short descriptions; over 95% of the talks I saw had high-quality content.

TOA does a great job with branding and digital communication. Their app pushed notifications an hour before one of your starred events and I received emails leading up to and during the conference with important information.

Using the EventBrite app to have a paperless sign-in was efficient and very user-friendly. The check-in process was painless and they had a dedicated desk for ticket issues, which was a smart move. 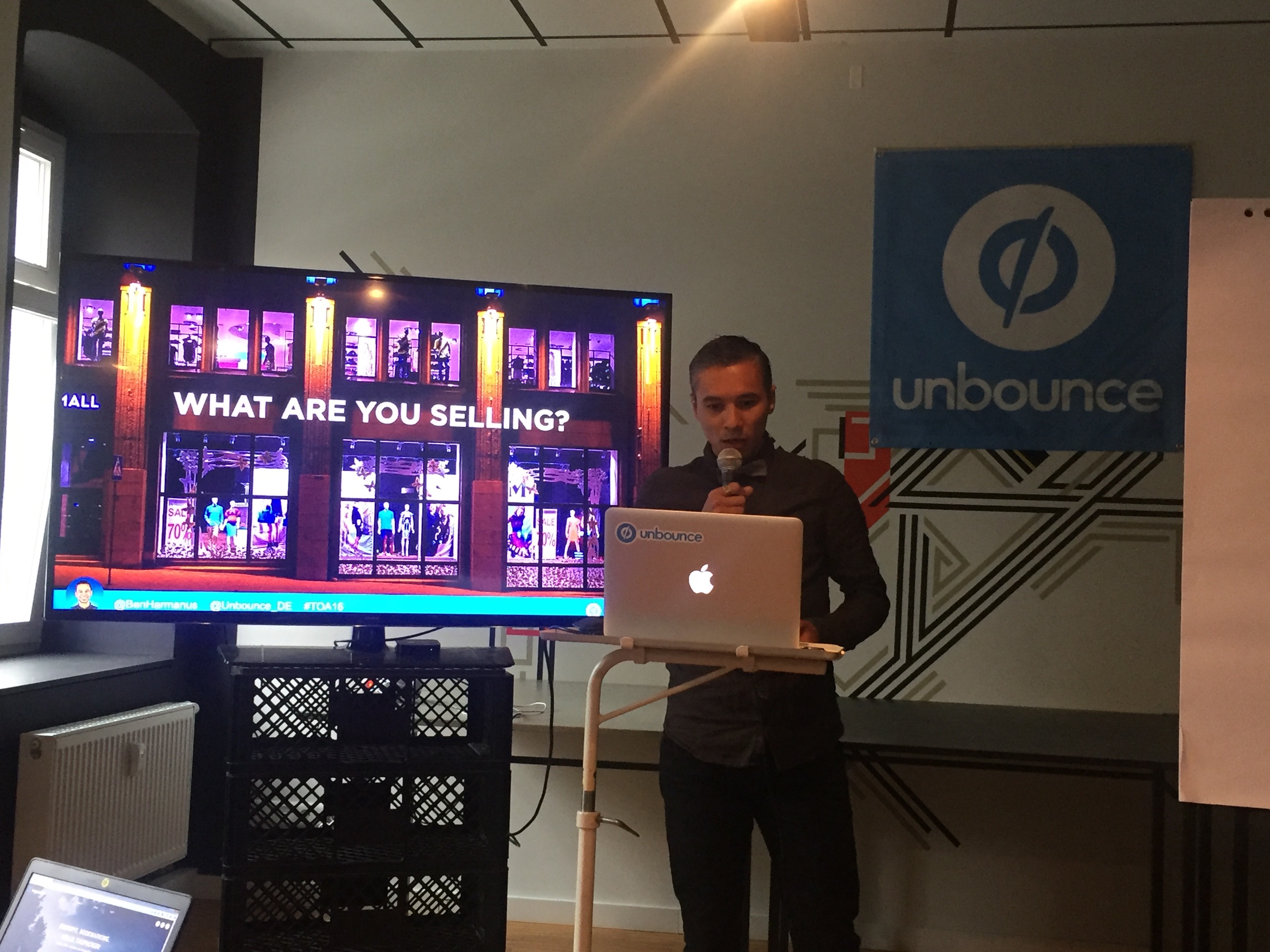 We were unable to get tickets to satellite events last year, so we were excited that each of us could attend at least one event this time around. The satellite events are an awesome and intimate way to meet fellow techies and brush up on skills from your own discipline or dabble in another. The events were not only helpful for founders and other entrepreneurs but also for us regular techies. Thanks to a satellite event at WeWork, Jamie had the chance to explore some VR. 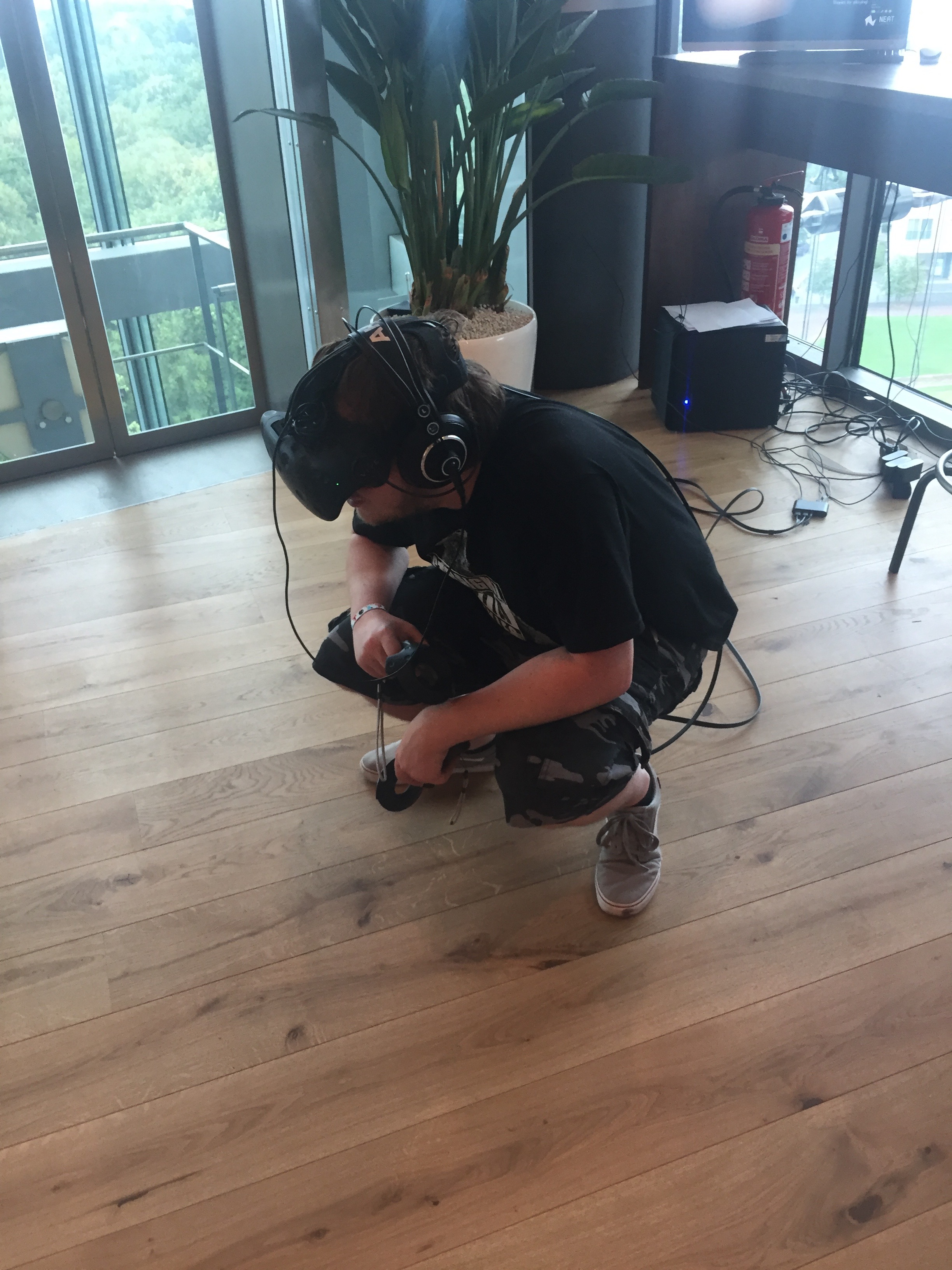 WiFi, seriously. For those of us who’ve organized a conference before, we know how difficult it can be to support good WiFi. TOA did an excellent job at this, as I never once had an issue with the WiFi. This was especially important since there was often spotty cell service at the venue.

If you’re planning a conference, I suggest you take a good look at TOA’s branding and communication efforts as that’s where they were truly successful and review their operational failures to help ensure that you can keep your attendees satisfied and coming back next year. 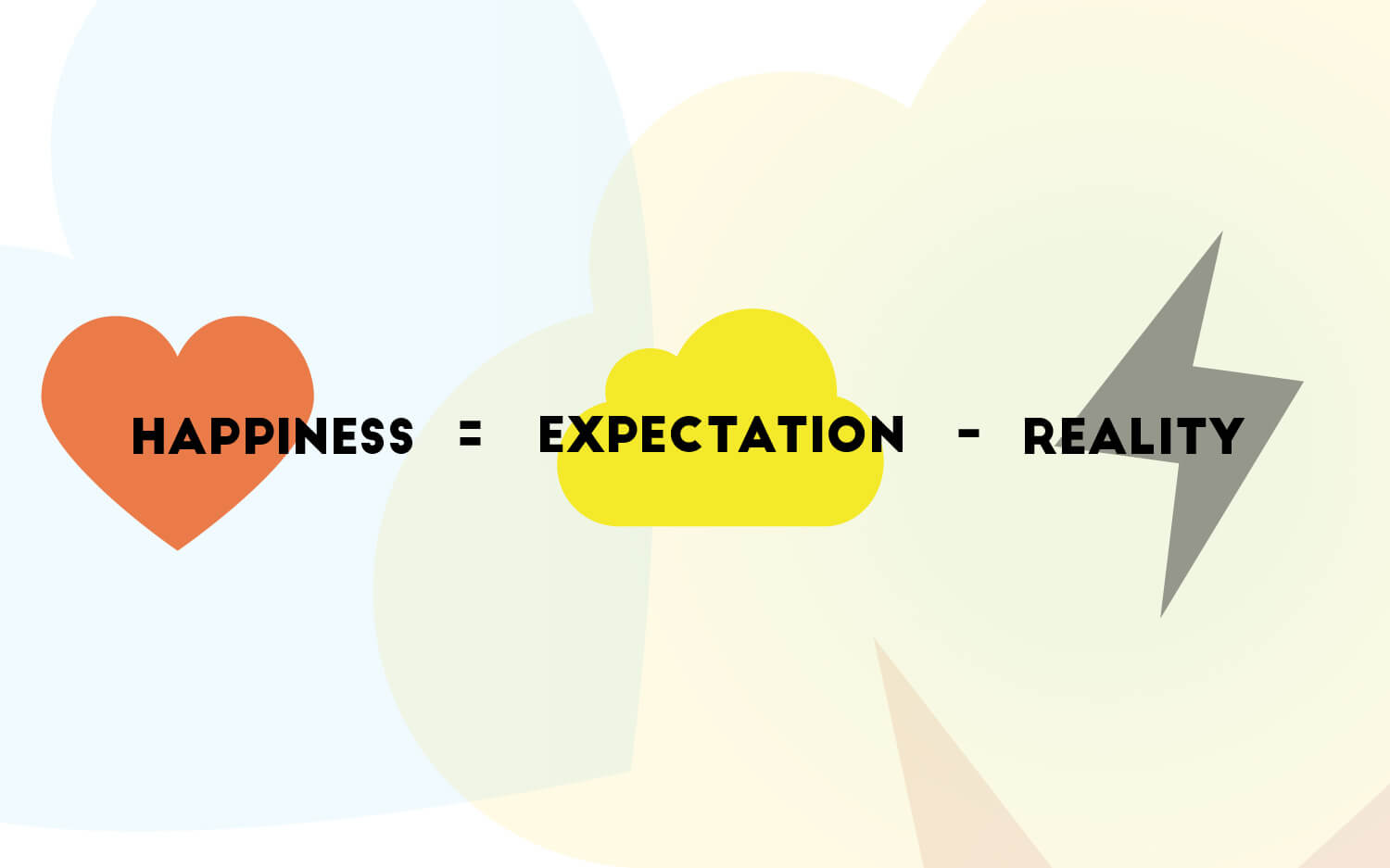 Katie Dill, the head of Experience Design at Airbnb, gave an exceptional talk at TOA and she emphasized that “Happiness = expectation - reality”. This is a great tidbit not only for designers, but for an event host to keep in mind. If you can communicate the right expectations, then, if reality matches or exceeds these expectations, you’ll have much higher attendee satisfaction.

Here are some quick lessons I learned from my experience at TOA - mostly from the areas where TOA shone - that I can apply to upcoming events that we organize like the UI/UX Conf and JS Conf China and the UI/UX meetup.

Manage expectations through communication before, during, and after the event. This will become very important in the upcoming months as we get closer to UI/UX Conf and NingJS. This is an area where we can improve, mainly by making a communication plan.

I’ll definitely look back on this post when the 2017 TOA ticket sales come around. My recommendations for going are:

For me? I’ll probably just support TOA through attendance at some of the satellite events, that are open to the general public and check in with the talks on the livestream. I’ll wait to hear if the operational issues of TOA 2016 are fixed and give 2018 a good look. The speakers and talks truly are inspirational and insightful and hopefully time will bring a new focus on networking and better organizational support.

Let me know what you thought about #TOA16 on Twitter (@wiredcraft).